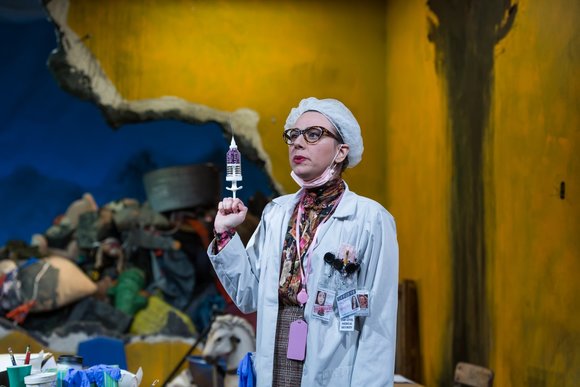 Featuring
Ceci Fernandez
Rachel Leslie
Emma Ramos
Mirirai Sithole
Sathya Sridharan
Tony Vo
Reggie White
​Mitchell Winter
At the bombed-out corner of a country that feels both foreign and familiar, three orphaned, stateless youth have built a simple life out of recreation and mischief-making. Their way of life is rocked as a parade of immodest strangers slowly invade their homestead offering gifts of knowledge, medicine, art and commerce. As long-held values are upended, and the lure of escape blurs their beliefs, life and landscape mutate into a grotesquery of charity that threaten their relationships and humanity.

TIME OUT NEW YORK: 4 STARS, Critic's Pick. "Howze's exciting piece is actually a savage burlesque, a clear-eyed bouffon treatment of war. [...] Dustin Wills directs an incredible cast. Leslie, Winter and Fernandez are crackerjack commedia performers, and Ramos should win a prize for this. The set by Mariana Sanchez Hernandez keeps springing little surprises out of its seemingly inert trash; I found myself sometimes laughing in sheer delight at it." - Helen Shaw

NEW YORK TIMES: "A brightly colored comic fantasia on cultural imperialism. [...] Directed by Dustin Wills at the Bushwick Starr, Mr. Howze’s intelligent, unruly and intermittently wonderful play is grounded in experience. [...] In “Frontières,” he is grappling with the impact of rich nations on poor ones, and the pervasive presumption that wealth equals cultural superiority. [...] There is much beauty in this abundance, and something deeply unsettling, too." - Laura Collins-Hughes

​WHAT SHOULD WE DO.COM: "The ever-evolving Bushwick Starr is now seen as one of the most reliable producers of theater in the five boroughs, and Frontiéres director Dustin Wills is one of downtown’s busiest and brightest emerging talents. It’s no wonder tickets are sold out this weekend but we can help you snag seats for the final performances next weekend! " - Patty Onderko