“All of us have wondered from time to time what would happen if we could just say what we’re thinking. In Paper Chairs’ production of Will Arbery’s Plano, that question is answered to glorious ends. [...] Plano is another of those shows where the ensemble is so good that one hates to point out any one performance above the others.” – Elizabeth Cobbe for The Austin Chronicle.

“we saw the show since we originally wrote this blurb. Our response? First: FUUUUUUUCK. Second: you know how they – whoever they are – say “if you only see one show a year, see this one,” right? Well, that” – The Austin Chronicle Event Listing.

Check out this The Austin Chronicle interview with Wayne Alan Brenner and paper chair’s co-founder Dustin Wills and Co-Producing Artistic Directors Elizabeth Doss and Lisa Laratta about Plano, Lorca, and rooting deeper (instead of expanding wider).

Check out this preview article from Austin American Statesman 360.
​
Check out this interview with director Dustin Wills and performer Elizabeth Doss featured on KUT Arts Eclectic.

NANTUCKET INQUIRER: "In lesser hands, the disruption of realistic events with fantastical happenings can leave audiences bewildered. Director Dustin Wills’ smart and crisp staging makes those scenes in "Evanston" work to great effectiveness. Wills has directed opera, and it shows. Along with Jean Kim’s imaginative sets, multimedia wizardry expands the stage through strobe and specialty lighting, projections and sound effects."
​ 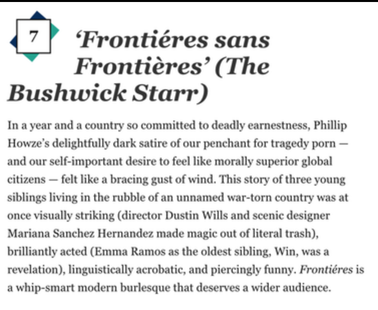 For Frontières Sans Frontiéres
​at The Bushwick Starr

TIME OUT NEW YORK: 4 STARS, Critic's Pick. "Howze's exciting piece is actually a savage burlesque, a clear-eyed bouffon treatment of war. [...] Dustin Wills directs an incredible cast. Leslie, Winter and Fernandez are crackerjack commedia performers, and Ramos should win a prize for this. The set by Mariana Sanchez Hernandez keeps springing little surprises out of its seemingly inert trash; I found myself sometimes laughing in sheer delight at it." - Helen Shaw

NEW YORK TIMES: "A brightly colored comic fantasia on cultural imperialism. [...] Directed by Dustin Wills at the Bushwick Starr, Mr. Howze’s intelligent, unruly and intermittently wonderful play is grounded in experience. [...] In “Frontières,” he is grappling with the impact of rich nations on poor ones, and the pervasive presumption that wealth equals cultural superiority. [...] There is much beauty in this abundance, and something deeply unsettling, too." - Laura Collins-Hughes

​"Dustin Wills, a New York based director, and Projection Designer, Johnny Moreno transformed this concert hall with a brilliant injection of real drama,  depth, and movement, and the hall never looked better. The projections in Le Pauvre Matelot were so well done, and so dramatically filled out the space on the Sprague stage, that I almost forgot where I was. That little Sprague box was given depth, and life in a way that I never would have thought possible. I was gobsmacked. These two short operas were as stunning visually as they were aurally,  and that is no small feat.

Alexandra Urquiola was utterly brilliant as the Madame.  There is a very good actress in that tiny little woman, and she looked like a million bucks in her glamorous, mourning black. The beautiful Natalia Rubis and Dean Murphy, who have never sounded better, were fearless in their portrayals of The Wife and The Friend. Natalia has a wonderful, expressive face, which was, from time to time, projected quite enormously on the back wall of the stage. His murder, carried out by the clueless and tragic Wife, was brilliantly told through both projections and the live Ms. Rubis, who carries out the murder, as if she is in a trance."
For Orange Julius at Rattlestick Playwrights Theatre

TIME OUT NEW YORK: 4 STARS, Recommended. "Basil Kreimendahl's excellent new play doesn't build the way a conventional drama does. Orange Julius is more pointillist than that: an out-of-order scattering of memories from one trans boy's life. [...] What does this have to do with the plot? Nothing! Aristotle would plotz: It’s totally extraneous. But Kreimendahl is the god in these details, creating a portrait of real family dynamics far more “realistic” than those in a dozen well-made plays. The discombobulated structure is part of that; chronology been fragmented by Nut's retrospective grief. This is the rare play about a child coming to grips with the damage he's done his parent, rather than the other way around. What good does “sequence” do when you're grappling with death, illness and unkindnesses that can't be unsaid? [...] Dustin Wills directs with an uncommonly intimate grip; the cast is superb, and the execution (particularly Palmer Hefferan's sound design) is confident and effortless. If these are Kreimendahl's own memories, it’s a blessing that such fragile things are being treated so tenderly." Helen Shaw

THE NEW YORKER: "In Basil Kreimendahl’s assured and affecting memory play, Julius (Stephen Payne), a Vietnam veteran exposed to Agent Orange, is dying of cancer. This final illness invites Nut (Jess Barbagallo), his transgender son, to parse their knotty relationship. [...] On a set that resembles a dingy suburban garage, the director, Dustin Wills, smartly stages the play’s lunges from recollection to confession to imagined wartime scenes, liberally borrowed from eighties films. Barbagallo (“O, Earth”) movingly suggests a desire for connection made impossible by dynamics of gender and family." - Alexis Soloski

NEW YORK TIMES: "In Basil Kreimendahl’s “Orange Julius,” at Rattlestick Playwrights Theater, memory twines with fantasy as Nut (Jess Barbagallo) scavenges through the past, searching for Julius (Stephen Payne). [...] Mary Testa gives an appealingly down-to-earth performance as France, Nut’s mother. [...] In Mr. Barbagallo’s hands, Nut is instantly winning, with a warm, wry humor that cushions the more painful moments. [...] Mr. Payne’s performance is a movingly weather-beaten wreck of a man whose body and mind fall apart and leave him dead too soon. Grizzled and tormented, he’s an outsider in his own home, prone to fury and sometimes violence. But there’s kindness in him, too, and vulnerability." - Laura Collins-Hughes

“A DARKLY WHIMSICAL DISH… a cross between ‘The Brady Bunch’ and ‘Pee-wee’s Playhouse’… The actors perform their loony roles with ferocious conviction… a delight” — Charles McNulty, Los Angeles Times

A REVELATION… cuts to the quick with dark comedy and brutality… Laws' brilliant script is a tour de force for four actors with stamina and focus seldom seen… I cannot recommend this production highly enough. Blueberry Toast is a MUST SEE!... especially for true students of Theatre.” — Michael Sheehan, On Stage Los Angeles

“ABSURDIST BLACK COMEDY… Playwright Laws could not have asked for a finer team to bring her words to life than Echo Theatre Company” — Steven Stanley, Stage Scene LA

“SMART SATIRE… had the audience in stitches” — Erin Conley, On Stage and Screen

“HILARITY… My jaw kept dropping, and I just kept laughing! So did everybody else!” — David MacDowell Blue, The World Through Night-Tinted Glasses

“AN OVER-THE-TOP EXPERIENCE… pulls no punches with its mix of comedy and horror… Laws has a unique and interesting vision” — David Maurer, Culture Spot LA

For The Foundry Theatre's O, Earth

TIME OUT NEW YORK Critic's Pick
5 out of 5 Stars

"Director Dustin Wills offers a basically flawless staging of the text. What a thrill it is to see a show that reaches out to Wilder's genius—and actually touches it. O, Theater, I thought. O, Show." - Helen Shaw, Time Out New York

"Director, Dustin Wills, has supplied O, Earth with plenty of silliness and surreality, making a sparkling, jagged mishmash of time and place that includes contemporary Greenwich Village and Los Angeles. [...] O, Earth answers that fear with capacious sympathy and the certainty that sexuality — like race, like gender — should shut no one’s experience out of the stories we tell." - Laura Collins-Hughes, New York Times

"Director Dustin Wills isn’t afraid to take a million disparate things and smash them together. He and his design team lead us through well-organized chaos. [...] I don’t think I was the only one refreshed and renewed by the words of Casey Llewellyn, so finely executed by director Dustin Wills, as we danced our way out onto the streets of Sixth Avenue, just mere blocks from Stonewall." - Keith Paul Medelis, Theatre is Easy

"The Foundry Theatre production directed by Dustin Wills is always surprising, always theatrical. [...] Wills’ production is continually taking us by surprise both by his casting and his choices." -Victor Gluck, Theatre Scene
​
SELECTED FEATURES 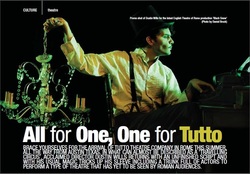 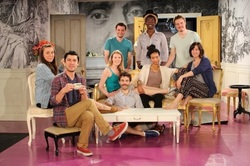 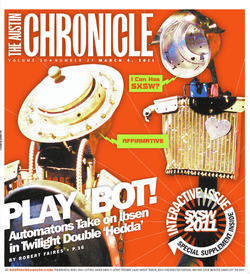 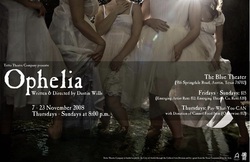 Kate Tarker's Thunderbodies last night was one of the most startling theatrical experiences I've had. The influence of Chris Bayes on Yale Drama students seemed clear across the board - in Tarker's writing, the design elements, Dustin Wills' direction, and the performances: particularly Christopher Geary's Michail and Celeste Arias' Grotilde, the most sustained act of intentional grostesqueness I've seen from a young performer. Sarah Kane channeling Jarry.
-Walter Bilderback, The Wilma Theater

"Inventive, lively, and surprisingly serious, this Peter Pan lets us feel not only a very real cry for the cozy world of a mother’s care but makes us feel the threats to childhood that we should care about: the final images, set in the time of the Great War, can easily be transported to the time of the Blitz or to the sites of our contemporary drone strikes. Wills and company reach out from an orphans’ nursery—filled with children already missing important aspects of family and identity—to grab us with a sense of the atrocity that is the loss of innocence, and the loss of innocent lives."
- New Haven Review


Drunk Enough to Say I Love You

"You can only be rather awed by the pas de deux of seduction, sexual interaction, hurt feelings, lovers’ tiffs, and boastful braggadocio that takes place between Sam and Guy."
- New Haven Review

"The Cab’s production respects the material all the way, adding great touches like a Colts-drawn stand-off, projections that serve to remind us that what we’re watching is taking place in a conceptual space where the inner landscape is dreamy and tinged with surrealism."
- New Haven Advocate

"This is a brisk and bracing production, geared for summer, with slamming doors and outthrust swords. But it’s also wise enough to know that it’s poking fun at social pretensions in general, not just parading a bunch of kooks around a stage."
- New Haven Advocate

"The whole show seems exhilaratingly on the edge of collapse for the entire time it’s happening. The chaos perfectly conveys the story Bulgakov is telling.”
– New Haven Theatre Jerk

"This is a profound journey into undocumented lifestyles and human directions, achieved with admirable balance, useful abstraction and a neat open-endedness"
– New Haven Theatre Jerk

“…as you sit in the yard of the Vortex with the vault of Texas sky above and the parched ground below, you feel their bond to the land in your bones.”
– Robert Faires, Austin Chronicle

“It's the theatrical equivalent of Ali's rope-a-dope, wearing audiences out by bobbing and weaving, laying back, and then delivering the emotional knock-out punch that's impossible to see coming.”
– Don Solomon, Austinist

“Director Dustin Wills brings together a top-notch design team, combines it with some of Austin’s finest actors, and the result is a truly stunning spectacle.”
– Cate Blouke, Austin American Statesman

“I can't recall seeing many Austin theatre productions in the last 20 or so years so seamlessly perfect as this one.”
–Barry Pineo, Austin Chronicle

“…a riveting theatrical experience where the audience gets pulled into the private space of five isolated females who are brought together in the second act of this brilliant, incisive, original play.”
–Elizabeth Goletti, American Woman’s Association of Rome

“It may be the most professionally-directed and performed piece among the city's many impressive recent productions, and it's hard not to overstate just how much good there is to say about Wills' direction.”
– Dan Solomon, Austinist

“I don't feel I've done the show justice. There's so much to take in, provocative ideas and great moments and a zillion Shakespearean references that I can't include here. Simply said: Ophelia is riveting.”
–Avimaan Syam, Austin Chronicle