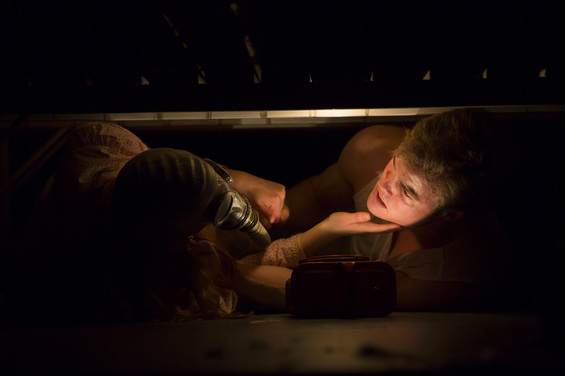 In J.M. Barrie’s masterpiece, Peter Pan must decide whether to grow up or remain a boy forever. Unlike the sanitized Peter Pans of our childhood, Barrie’s initial draft of the play depicts growing up as harrowing, treacherous, and infinitely complicated. In this new adaptation, based on Barrie’s earliest, unpublished manuscripts, a group of real "lost boys" bring their Peter Pan to life. Will they—and their unbridled imaginations—survive the tick-tocking crocodile of time?

"You may think you know Peter Pan. He’s a flying boy, usually played onstage by a grown woman, who takes a girl named Wendy to an enchanted land where there are pirates and alligators and no mothers. But it’s no pie-in-the-sky lark. This is a harrowing tale of abandoned kids and the hazards they endure on a daily basis. It’s a story of survival and eternal hopefulness." - Christopher Arnott, New Haven Independent
FULL REVIEW HERE

"Inventive, lively, and surprisingly serious, this Peter Pan lets us feel not only a very real cry for the cozy world of a mother’s care but makes us feel the threats to childhood that we should care about: the final images, set in the time of the Great War, can easily be transported to the time of the Blitz or to the sites of our contemporary drone strikes. Wills and company reach out from an orphans’ nursery—filled with children already missing important aspects of family and identity—to grab us with a sense of the atrocity that is the loss of innocence, and the loss of innocent lives." - Donald Brown, New Haven Review
FULL REVIEW HERE

​
Yale’s Beinecke Library houses the world’s largest collection of J.M. Barrie’s books, manuscripts, letters and ephemera. There we discovered that Peter Pan was Barrie’s life-long passion, and he wrote seemingly endless drafts of his play from 1904 to 1928, with a novelized version in between. The ending of the story obsessed him. There are almost as many versions of it as there are drafts of the play. In one, the culminating scene features a parade of mothers, each hoping to be reunited with one of the Lost Boys. In another, Captain Hook transforms into a schoolmaster chasing the truant Peter with a ruler.

The idea that no definitive version of the story exists allowed a window to open somewhere in our imaginations. In this adaptation we’ve set the play in an orphanage in the early part of the twentieth century. For this community, the loss of mothers is an immediate reality, and the longing for maternal love takes on a fresh urgency. We gathered from Barrie’s rewrites deleted material that further illuminated this idea, and our final script became a synthesis of his many versions.

In thinking about the Peter Pan myth and its relationship to the wider world, we talked a lot about abandonment and a larger, collective loss of innocence. If there was a modern loss of innocence on a grand scale, a psychic cataclysm on the global level, it was precipitated by the events surrounding WWI, which began one hundred years ago next year. Fragments of the war’s horrors found their way into many great works of post-war drama as artists tried to contend with the magnitude of what had occurred. So taking our cue from many of the great early modernist works, WWI haunts this production.

Ultimately, our Peter Pan finds its home in the poetic reality of the stage, where the mythic, historical, theatrical, and imaginary all co-exist. As Barrie says of the immortal urchin, “The difference between him and other boys at such a time was that they knew it was make-believe, while to him make-believe and true were exactly the same thing.”